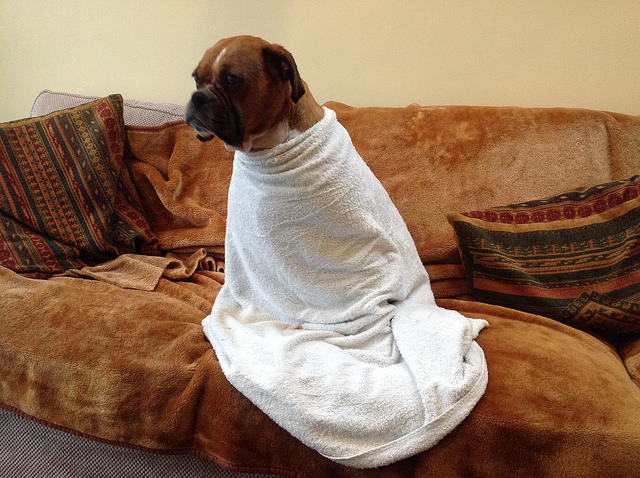 Demodectic mange in a boxer dog

A skin disease in boxer dogs is very common, which is known as ‘Demodectic mange’, sometimes also referred as red mange, and it normally affects the boxer dogs in its young age. Demodectic mange is caused by a mite which is called ‘demodectic mite’ that is found on the bodies of dogs and even it lives on human bodies without providing any harm any kind of irritation.

These mites are found clinging with hair follicles of the dog’s skins and in humans, these mites usually are present in the skin, eyelids, and the wrinkles of the nose. Demodectic mange can be diagnosed through skin scraping by a proper veterinarian and he can recommend dips, injections and oral medications.

Histiocytoma is a kind of skin tumour in a boxer dog

A histiocytoma is a kind of skin tumour which is developed in Langerhans cells which play a vital role in protecting the immunity system of the tissues related to the outer parts like nose, stomach and lungs particularly to the skin’s surface. It is a common diseases in boxer dog as the skin of boxer dog is flat-coated. And it is also prevalent in the young boxer particularly in their puppyhood.

Skin itching and body allergies in a boxer dog

Often the treatment is covered by injecting some medicine in the boxer dog’s body to get him relieved. Sometimes, the boxer dog is also affected from atopy dermatitis, a form of severe allergy that might result into full body rash. In this case, the treatment is started by diagnosing the source of the allergen and then knocking it out of the body.

Hay fever allergy and food allergies in a boxer dog

Hay fever which is a form of allergy and is known to be caused by pollen or dust particles; it is transmitted in the nose and eyes especially due to air, is also a culprit for bringing a reaction in boxer dogs. Treatment is also done in this type by detecting the source and usually grass, hayseeds and pollen grains are noticed as common begetters.

Sometimes, a boxer dog is also affected from certain type of food allergies that result in body rash and stomach unrest. Food allergies are occasionally occurred when some food element is anticipated by the immunity system of a boxer dog as fatal. In this case, after medical investigation and pin pointing such food element, the same to be excluded from the food chart of boxer dog and thus it can be cured.

Seasonal effects and winter dryness in a boxer dog

Seasonal effects in which the dryness in the skin in winter is the most prominent, particularly damage the skins of sensitive boxer dogs who have goofy coat and cracked paws. Vets recommend oatmeal baths in this condition. Hair loss is the major result in this type of skin allergy attack and the hair loss particularly appears on the both sides of the effected boxer dog. In medical terms, this problem can also be referred as ‘Seasonal alopecia’ or ‘Cyclic follicular dysplasia’.

Acne in a Boxer dog; another major skin problem in a boxer dog

In another major skin problem which is the product of constant exposure of a boxer dog to plastic and plastic made items; it results in the outcome of pimples appearance in the mouth area and its surroundings and it is known as acne in a boxer dog. In this situation, the best recommendations normally given by vets are to remove all plastic related material from the range of the effected boxer dog.

This material might include, plastic toys, plastic bags, plastic bowls and other alike items. If boxer dog acne is not eradicated in time, it can become so severe that some liquid can be emitted frequently from boxer’s mouth.

How to keep your boxer dog safe from skin problems?

In order to keep a boxer away from skin diseases, it is recommended to give a bath to a normal boxer dog after every 3 weeks or so. Some boxer god owners do a mistake by giving often bathing to their boxer dogs as it can damage the sensitive skin of a boxer dog. Instead, cleansing and combing of the coat in a proper manner is a very beneficial exercise as in this way, the dead hair can be abolished, so the air passing in the hair will be done without any restriction.
However. if your boxer dog is affected from a skin problem, then give him a bath every week with a palpable oatmeal shampoo or such soap to provide him comfort. Sometimes, the veterinarian can suggest a different kind of washing off. The instructions should be followed strictly. After the bath, boxer dog will shake its body, it is better to collide him in calm way and the air should be avowed to make the skin moisture-less.

If your boxer dog’s vet has diagnosed some serious types of skin problems like mange, mites or allergic infections, then the medication as recommended by him must be applied on the affected boxer dog for proper treatment. In the young age of a boxer dog, the area surrounding the neck can have sloppy skin. This area particularly should not become wet or muggy. In the adulthood, naturally the skin shall be stiffened and muscles will fill the gaps.